Not enough energy is generated in the FrankfurtRhineMain area to cover demand. More than half of the required electricity must be imported from other regions in Hesse or Germany. The rest is produced locally: in fossil power plants, waste incineration and from renewable energies. Overall, the share of fossil fuels such as coal, oil and natural gas in locally generated electricity is more than two thirds (78 percent). In heat generation, the figure is 72 percent.

More than half of the electricity is imported 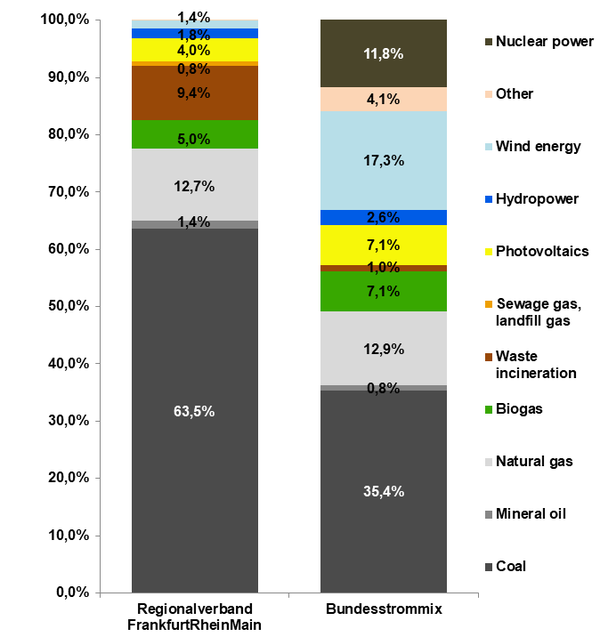 Development of electricity generation from renewable energies (2001 to 2018) 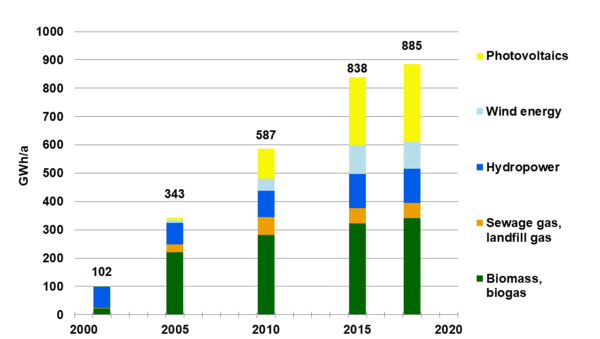 Heat consumption in the region amounted to around 26 TWh in 2018. Of this, 28.6 percent (≈ 7.5 TWh/a) was generated by local energy plants. The remaining 71.4 percent (≈ 18.8 TWh/a) was presumably covered by fossil domestic fuel. Data on energy production from fossil domestic fuels are difficult to access and could only be collected in individual cases. Fossil domestic fuel is the generation of heat by burning energy sources such as gas and oil in building heating systems. Heat is usually produced on site, as the losses are very high if there is a long distance between production and consumption, and only little heat reaches the consumers. It can therefore be assumed that the amount of heat produced by fossil fuel is the difference between heat demand and collected heat production.

About 9.5 percent of heat in the region was generated by renewable energy in 2018. This corresponds to 716 GWh/a. Of this, the majority, 65.1 percent (≈ 464 GWh/a), was biomass - subdivided into biomass (13.5 percent) and biogas (51.6 percent). This includes wood and residual materials for private households, such as pellets. Biomass and biogas were thus the most significant energy sources in the region for both electricity and heat generation from renewable sources. Heat pumps and shallow geothermal generated 21.9 percent (≈ 157 GWh/a) of local renewable heat. Solar thermal energy accounted for 8.7 percent (≈ 63 GWh/a), and sewage and landfill gas accounted for 3.3 percent (≈ 23 GWh/a). About 0.9 percent (≈ 6 GWh/a) of the local renewable heat was generated by thermal springs. 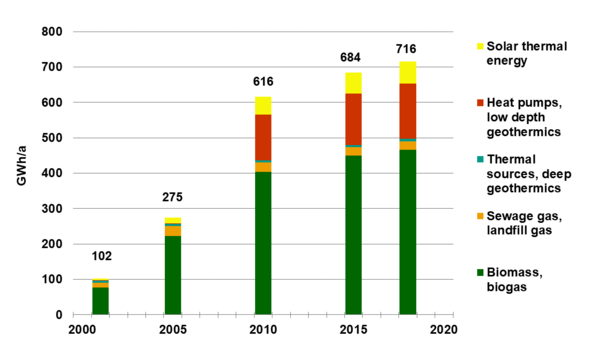 The information on electricity and heat generation in the region has been compiled from the Municipal Energy Profile for the Regional Authority FrankfurtRheinMain (status 2018). You can find the profile as well as detailed data on the individual member municipalities and administrative districts under Municipal Energy Profiles. When calculating the energy profiles, we are dependent on the availability of various third-party data, some of which are published with a delay of several years. 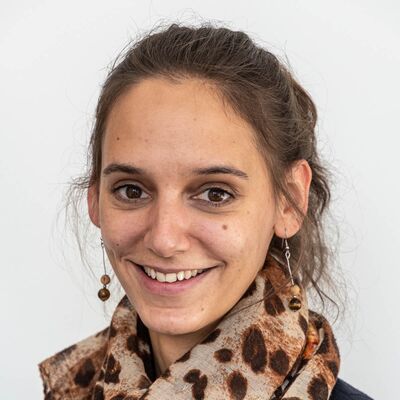